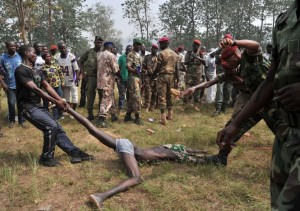 Members of the Central African Armed Forces (FACA) lynch a man suspected of being a former Seleka rebel on February 5, 2014, in Bangui. The impoverished former French colony descended into chaos last March when rebel forces overthrew the president, but an interim government lost control of the country. Rival Muslim and Christian militias are now battling each other and rogue checkpoints have been set up on nearly all main roads.Despite the presence of French and African peacekeeping troops, violence continues to rock the country, and has already forced about a fifth of the population of 4.6 million from their homes.
AFP PHOTO/ ISSOUF SANOGO —GRAPHIC CONTENT —-ISSOUF SANOGO/AFP/Getty Images