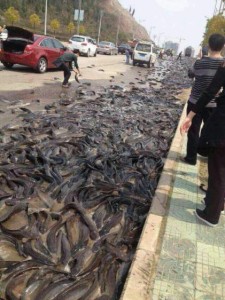 KAILI, CHINA – MARCH 17: (CHINA OUT) Thousands of kilograms of catfish scatter across the road in the Kaili Development Zone in Qiandongnan Miao and Dong Autonomous Prefecture on March 17, 2015 in Kaili, Guizhou province of China. A truck carried 6,800 kilograms of catfish on the road and the truck door opened due to sudden reasons which caused the catfish scattering to the ground. With the help of fire crews of Development Zone Squadron in Qiandongnan Fire Detachment and local people, the catfish were loaded on the truck again. (Photo by ChinaFotoPress/ChinaFotoPress via Getty Images)